The Latara figure (covered previously) has been seen, now multiple times, with a few very clear paint errors. The feather on her head is actually detailed in the error figure with a pattern similar to that of Paploo. You'll also notice that her inner ears are painted black as well. Since these were hand painted, its possible that a number of them were accidentally released with this deco, samples of the errors can be seen below. 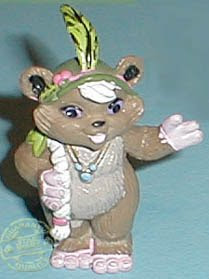 Posted by starwarscomicsspain at 5:55 PM

The Comics Spain Wicket figure has a similar counterpart made for the Disney / Star Tours theme park, and the figures are often confused. The Disney figure was actually released in 1990 instead of 1986 - but you cant tell this by looking at the copyright stamp because the Disney figure is undated, and is only marked "LFL made in China" on the bottom of one of his feet. Even though the colors vary between the Comics Spain and Disney figures, and the Disney version is slightly smaller - they are readily confused. 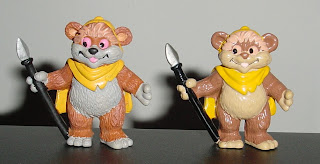 The best way to distinguish between the two types of figures is the deco and the texture of the sculpt - the paint is different for all the Comics Spain variations, save for the final version of the deco - which is most often confused for the Disney figure. The first 3 Wicket variations released by Comics Spain can be easily identified because they all have pink eyes - a color that was never used on the Disney figure. If you own a Wicket or are searching for one - the pink eyes will always indicate a figure made by Comics Spain. When it comes to the final Comics Spain variant (seen in the center of the picture below), the colors are nearly the same as the Disney figure and often cant be told apart unless compared side-by-side. You'll notice with the Comics Spain figure though, the brown fur is lighter and is actually the color of the pvc plastic - while the Disney version is brown paint. Its also pretty easy to see the raised detail in the sculpt of the Comics Spain figure - especially throughout the fur, while the Disney version is very smooth.

Posted by starwarscomicsspain at 1:41 PM